1. Low or free of tuition fee

Students can avoid taking a huge loan by applying for scholarships offered by various German universities, primarily government-funded institutions. They have incredibly favorable programs for foreigners that are seeking the most affordable funding.

For Master's degrees, be prepared to pay a compulsory semester fee, typically less than €300 (~US$350), to cover administration costs.

For example, lecturers from one of the four universities: Universidad de Costa Rica, Instituto Tecnológico de Costa Rica, Universidad Nacional de Costa Rica, and Universidad Estatal a Distancia can apply for scholarships for doctoral and Master's degrees in German that last up to 4 years under the agreement between CONARE and the DAAD. Such kind of award gives holders funding for initial language courses; health insurance; as well as travel, research, and study allowance.

Holders of Rosa-Luxemburg-Stiftung scholarship can receive up to €850 besides a monthly sum of €320 to incur studying charges. The coverage even includes health and nursing insurance of €105 at most. In case you apply for study extensions, your scholarship will remain valid.

Undergraduates, graduates, and doctoral students that want to apply for universities of applied sciences or the arts may find the Heinrich Böll Foundation helpful. Basic requirements for applicants include excellent academic performance, actively social and political engagement, as well as interest in the foundation's core values, which promote sustainability, ecology, human rights, democracy, justice, and self-determination.

Understanding the financial burden on international students when studying abroad, the Erasmus program provides the coverage of €15 billion for students across the EU for seven years.

3. Many educational institutions with a wide range of study courses

In terms of university and course options, Germany ranks top with the broadest range of about 17,731-degree program types from over 400 state-accredited higher education institutions.

In the same winter semester one year before, international students in universities constitute 14% while that figure in universities of applied sciences is lower, at 9.9%. 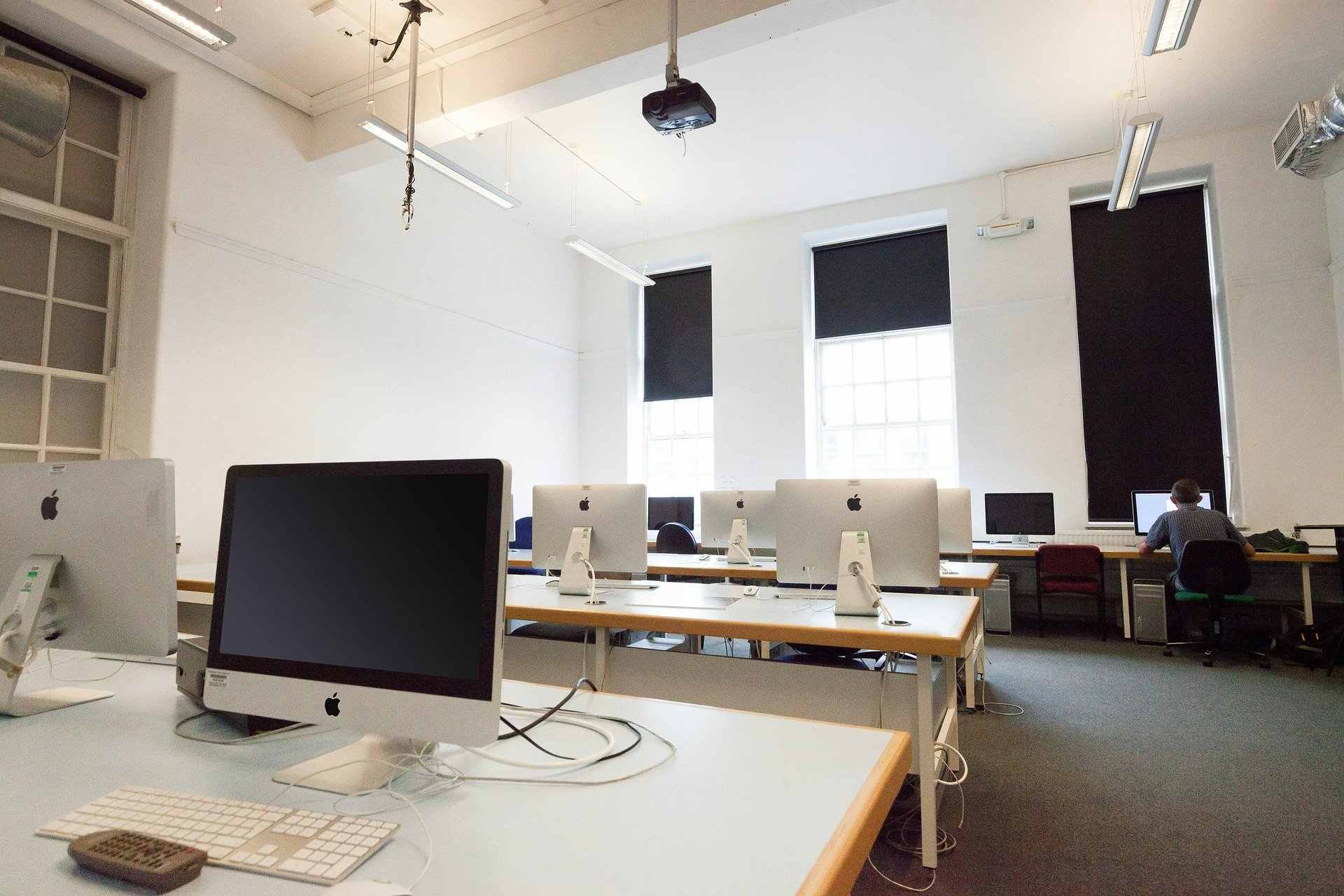 66 specialized fields in 215 German universities, which are distributed in over 154 cities that offer about 2,000 English-language degree programs in Germany.

The lack of German command shouldn't be an obstacle to international students since there's an increasing number of German universities that provide courses in English. About 835 degrees are available in English at 58 universities ranking in the top 1,000, including 726 Master and 109 Bachelor's programs. You still can study and complete higher education in English, which serves as a basis of course instruction delivery.

Therefore, it's understandable as to why Germany is only inferior to the Netherlands regarding the most significant number of degrees in English, making it an attractive destination for international students.

5. Opportunities for exchange semester or internship

German academic institutions have quite a good network with universities all over the world. Students have opportunities to go to different countries for exchange semester or internship.

Also, with an educational infrastructure driven by technology, Germany can help students make essential preparations for their future. You can quickly get access to every modern educational assistance and facilities on campus to enjoy high-class education.

German universities have established cooperation with educational institutions in more than 150 countries, equal to 5,400 partners both universities and non-universities.

For instance, the University of Oldenburg cooperates with the University of New England in libraries and scientific conferences with exchange programs of scholars, teaching staff and students. In Asia, the Esslingen University of Applied Sciences exchanges trainees in electrical, industrial, and precision engineering with the Nanyang Polytechnic of Singapore. In the African continent, students at the Europa University Flensburg can register for exchange programs with the Universidad Católica del Norte of Chile and many more. The potential candidates are expected to have majors in cultural studies, social sciences, and management.

The practical part of the studies plays an integral role in German academic institutions. Universities and the obtained graduate degree are well-known all over the world for firm-based education and also further knowledge.

Dual studies combine studying and working simultaneously, bring students to put in practice their theoretical gains at their educational institutions of the sort. This will save time and money while offering a chance of early emancipation.

A dual degree program combines the study at a university/university of applied sciences /vocational academy with an apprenticeship or practicum phases in the company.

In most dual study programs, theoretical and practical phases alternate in blocks of several weeks or months. For example, the students spend the semester at the university and the semester breaks in the company. In other programs, the change takes place weekly or even daily. The students then work in the company from Monday to Wednesday and visit the university on Thursday and Friday. A third variant is the upstream training. Here, the students only start their vocational training and only start their studies after the first year of apprenticeship. Finally, a fourth option is distance or online study, where students spend most of their studies at home.

In 2018, there were about 185,000 people unemployed despite owning an academic degree, decreasing by 8,000 compared to the previous year (-4 percent). Out of them, only 2.2% had studied applied sciences, the lowest percentage of the surveyed period on the European continent. It is easy for graduates from German universities to find a job given the robust education system that equips students with essential skills. 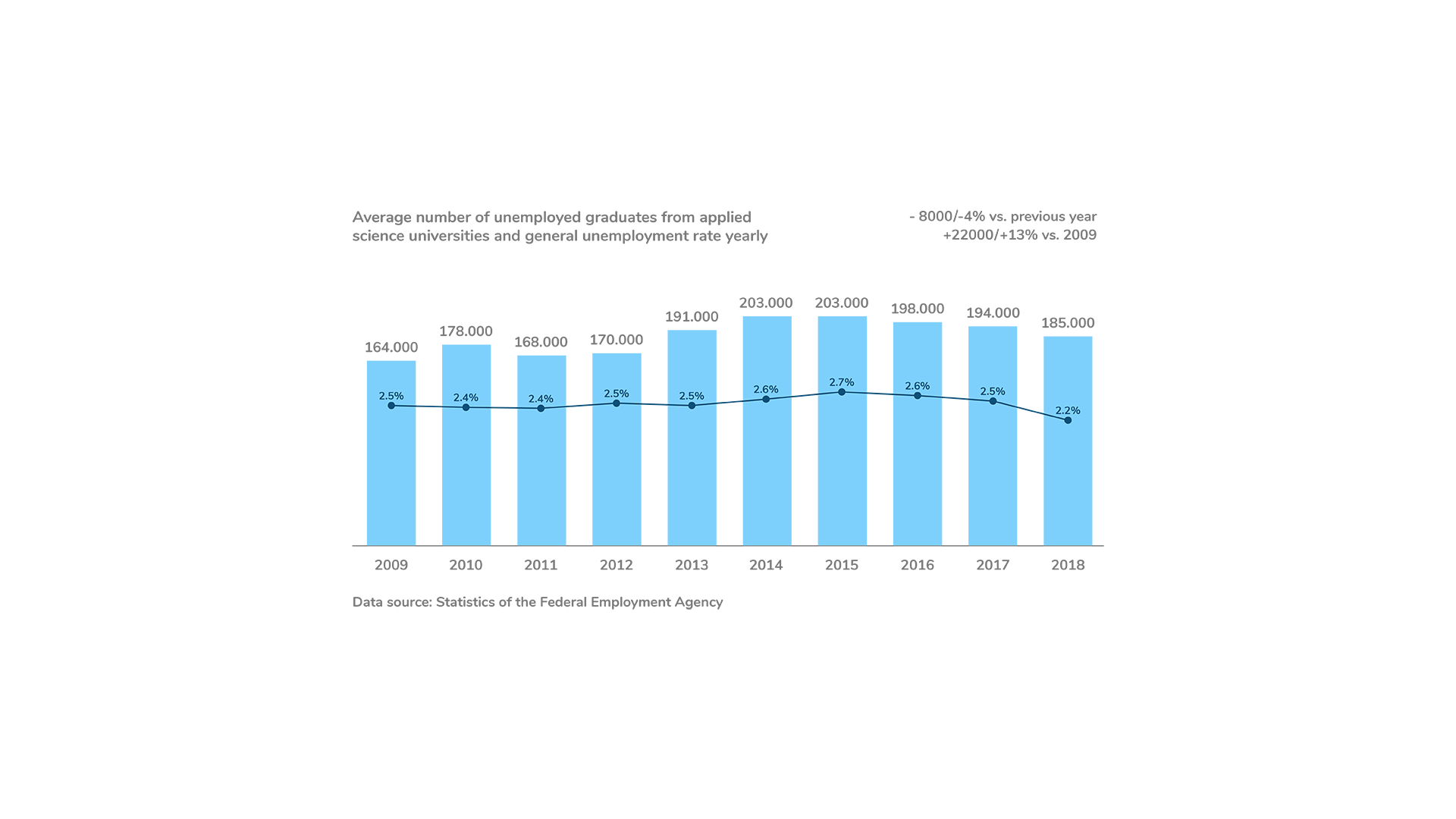 Living expenses in Germany are reasonable and affordable compared with other European countries (e.g., the same good has a higher price in the Netherlands, France, Belgium, Austria, etc.). Students also pay special lower tickets for public means of transport as well as entry fees to various institutions and buildings (e.g., theatres and museums). The cost of living in Germany is reasonable among popular residents. International students don't need to worry about costly rent, food, and clothing expenses while they are eligible for many concessions.

From August 2012 onward, international students are allowed to work 120 full or 240 half days in a year and a maximum of 20 hours/week (in comparison to 10 hours/week in the Netherlands or in Austria). The minimum wage in Germany in 2019 is €9.19 per hour and will be set to €9.35 from January 2020, which allows many students to afford their living and study without help from their families.

10. One of the most spoken language 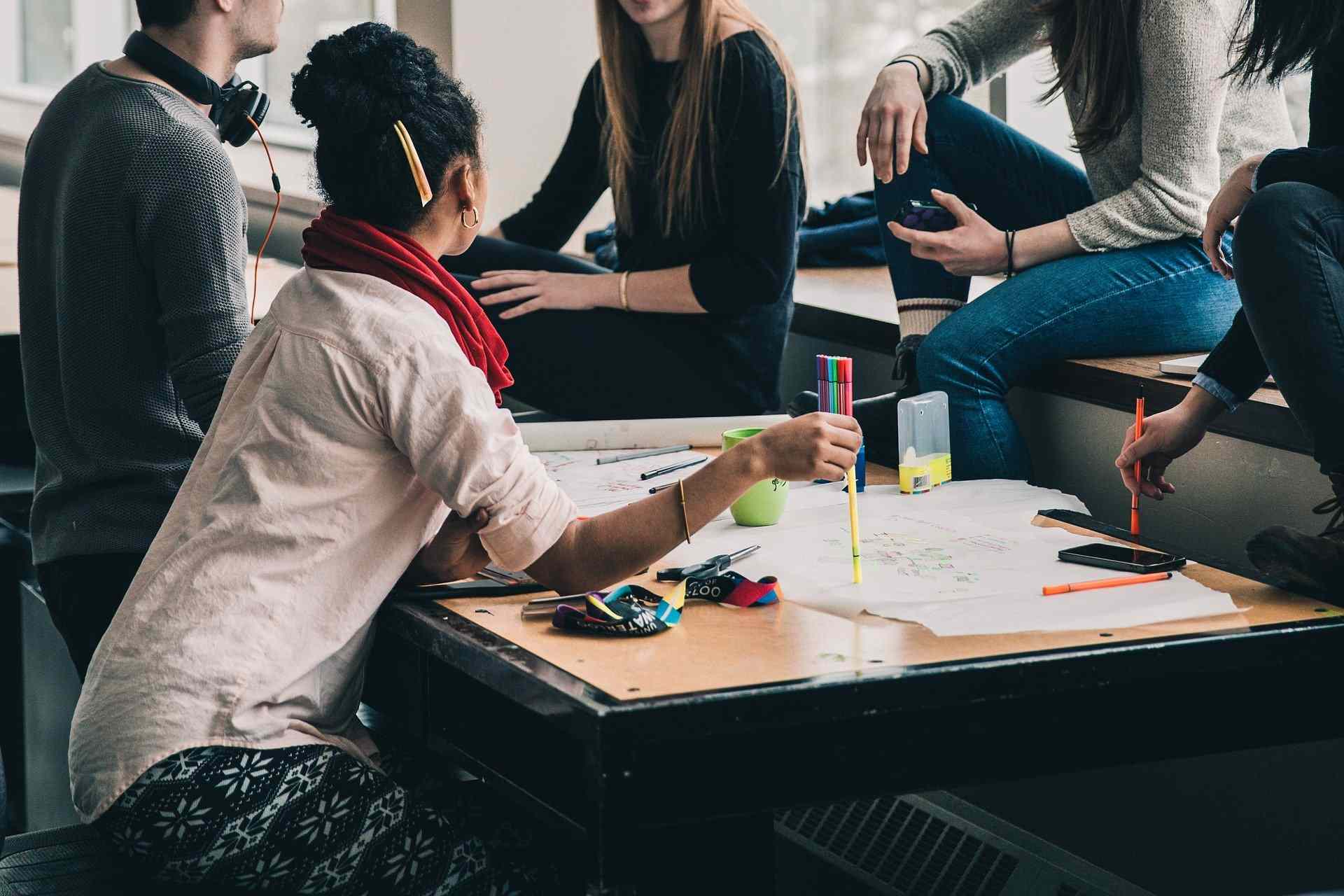 German has the greatest number of native speakers in the European Union and Germany is an official language in seven countries (Germany, Austria, Switzerland, Belgium, Luxembourg, Liechtenstein and South Tyrol of Italy).

With the international meaning percentage of 3/5, you can be sure to be understood in many of the world's regions.

Germany is located right at the heart of Europe, which makes it a culturally rich and intriguing country, influenced by the surrounding diverse ethnicities.

Germany includes busy cities, as well as serene beaches and mountain ranges. It is also located at the central position of Europe and enjoys the immense natural beauty that can add to your overall living experience.

The world-famous travel guide "Lonely Planet" issues a forecast of the best travel destinations for the next year.Like nine years ago, Germany is present in this year's publication as one of the ten most attractive global travel destinations and ranks second to Sri Lanka in the new book "Lonely Planet’s Best in Travel 2019". You can find all the reasons for Germany's attractive features in the book. Notably, one of them is the 100th anniversary of the establishment of the Bauhaus while the 30th anniversary of the fall of the Berlin Wall is also a salient point.

Regarding the architecture and design school of Bauhaus, "For one year, the Anniversary of this midwife of modernity - founded in Weimar in 1919 and after a heyday in Dessau by the Nazis in 1933 in Berlin virtually prohibited - celebrated," said in the book. The educational institution has kicked off an aesthetic movement that has left its strong vibrations worldwide until these days. "Brilliant new museums are opening up in the three cities, plus plenty of accompanying events and exhibitions throughout the country."

In 2018, Hamburg secured the fourth place of the top cities while Bavaria ranked eighth two years ago. In 2010, Germany was only second to El Salvador. 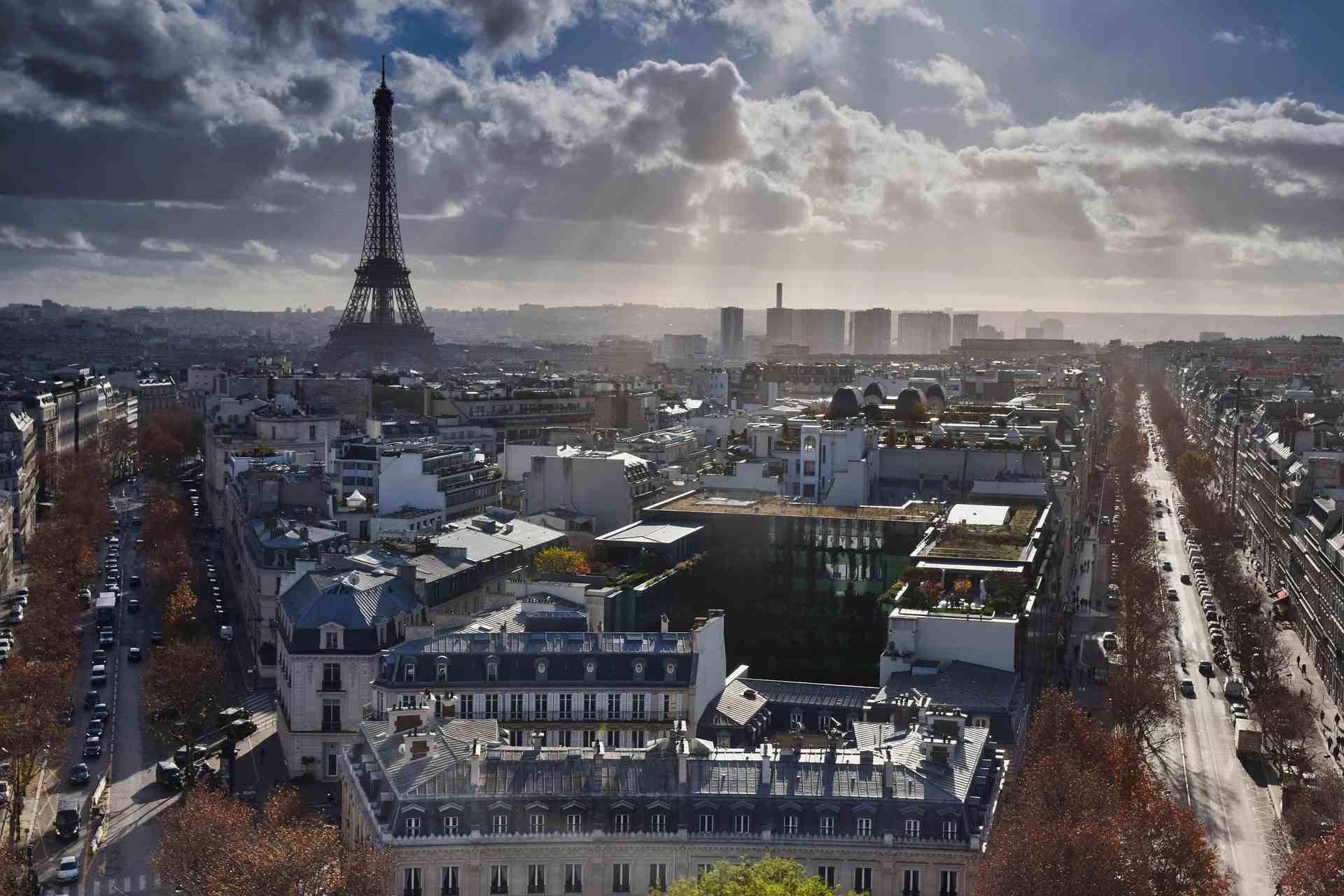 There are another 19 other countries that are not part of the Schengen Zone but allow foreign citizens of other non-Schengen countries to enter and stay in their territories, only by showing a valid multiple-entry Schengen Visa (Albania, Antigua and Barbuda, Belarus, Bosnia and Herzegovina, Bulgaria, Colombia, Croatia, Cyprus, Georgia, Gibraltar, Kosovo, Macedonia, Mexico, Montenegro, Romania, Sao Tome and Principe, Serbia, Turkey).

Germany ranked number 22 in and scored 1,547 in the Global Peace Index.

As a land of safety and peace, inhabitants in Germany can enjoy the utmost freedom thanks to the effective administration and strict system of rules and regulations.